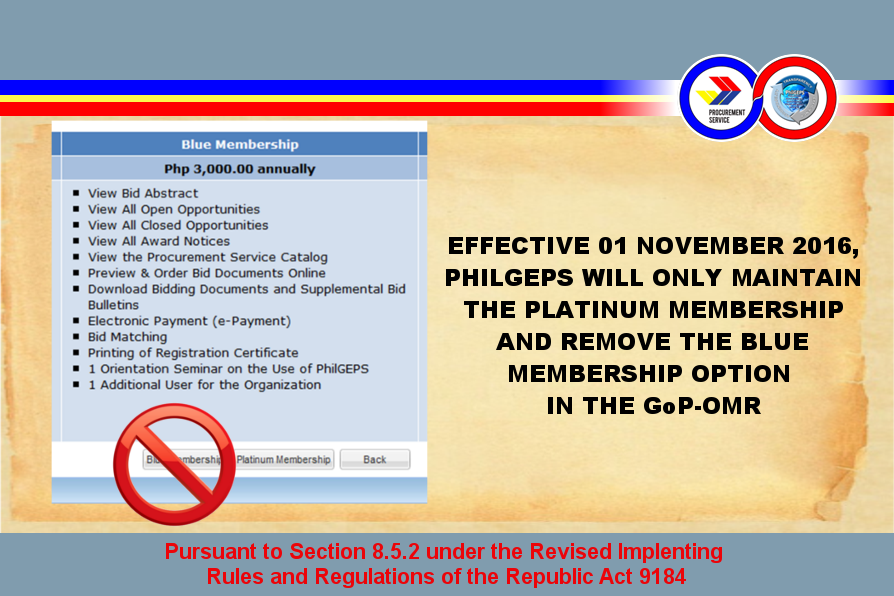 The 2016 Revised Implementing Rules and Regulations (IRR) of R.A. 9184, otherwise known as the Government Procurement Reform Act, has been published in the Official Gazette on 29 August 2016. It shall take effect 60 days after its publication.

In accordance with its implementation, please be informed of the following changes in the Revised IRR that is related to the PhilGEPS Membership of bidders:

8.5.2. All bidders shall upload and maintain in PhilGEPS a current and updated file of the following Class “A” eligibility documents under Sections 23.19a) and 24.1(a):

b) Mayor’s/ Business Permit or its Equivalent Document;

d) Philippine Contractors Accreditation Board (PCAB) license and registration; and

For Foreign Bidders, the foregoing documents may be substituted by the appropriate equivalent documents in English, if any, issued by the country of the bidder concerned. Otherwise, it must be accompanied by a translation of the documents in English issued by the relevant foreign government agency, the foreign government agency authorized to translate documents, or a registered translator in the foreign bidder’s country; and shall be authenticated by the appropriate Philippine foreign service establishment/post or the equivalent office having jurisdiction over the foreign bidder’s affairs in the Philippines.

These documents shall be accompanied by a Sworn Statement in a form prescribed by the GPPB stating that the documents submitted are complete and authentic copies of the original, and all statements and information provided therein are true and correct. Upon receipt of the said documents, the PhilGEPS shall process the same in accordance with the guidelines on the Government of the Philippines –Official Merchants Registry (GoP-OMR).

As such, we would like to inform all merchants that effective 01 November 2016, PhilGEPS will no longer accept upgrades to Blue Membership, hence, we encourage merchants to upgrade to Platinum Membership in order to comply with the provisions in the 2016 Revised IRR. Consequently, the Orientation Seminar for GoP-OMR and E-Bid Submission will be discontinued until further notice.

For existing merchants with Blue Membership, the guidelines on how to transition to Platinum Membership will be issued in succeeding communications.

For queries and clarifications, you may send an email to This email address is being protected from spambots. You need JavaScript enabled to view it., call our helpdesk at (02) 640-6900 locals 8302 to 8313, or visit us at the PhilGEPS Office at Unit 608 Raffles Corporate Center, F. Ortigas Jr. Road, Ortigas Center, Pasig City.