Corruption, in any shape and form, does nothing but tarnish the image of an organization.

In pursuit of its relentless efforts to sustain a high level of trust and confidence among its stakeholders, the Procurement Service (PS) of the Department of Budget and Management (DBM) took part in a training on the National Guidelines on Internal Control Systems (NGICS) at the Philippine International Convention Center (PICC) on January 24, 2020.

Office of the President Deputy Executive Secretary (DES) Alberto Bernardo lectured a crowd of PS-DBM division chiefs and other personnel on the concepts of Internal Control and Accountability — the objectives of which are to safeguard assets; to check accuracy and reliability of accounting data; to adhere to managerial policies; to comply with laws, rules, and regulations; and to ensure economical, efficient, and effective operations.

The discourse also touched on the legal bases, components, and other functions related to Internal Control and Internal Audit. All these, DES Bernardo underscored, hold fast to the very nature of public office: public officers and employees must at all times be accountable to the people. 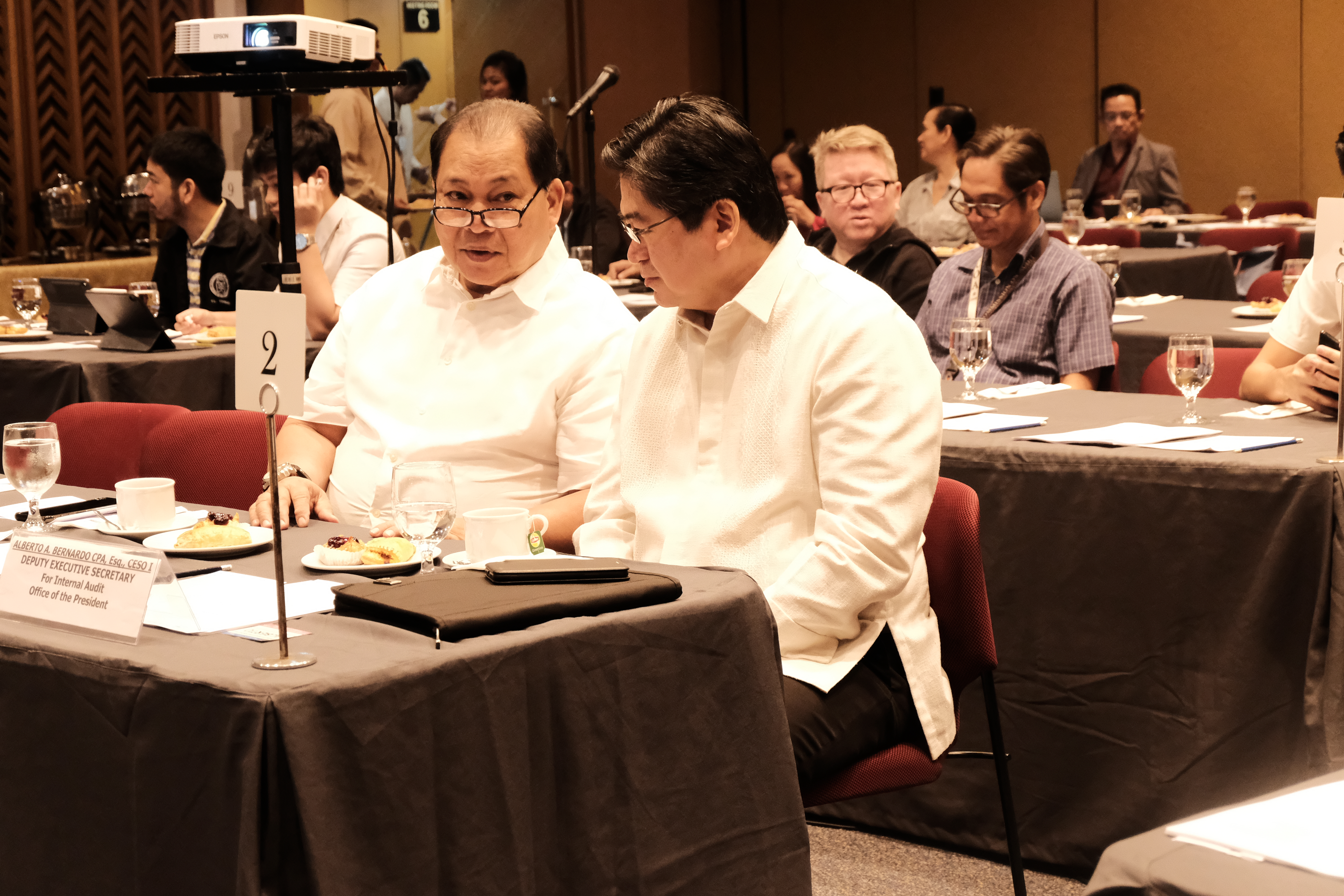 Department of Budget and Management (DBM) Secretary Wendel Avisado (left) with Office of the President Deputy Executive Secretary Alberto Bernardo (right) during the NGICS training and lecture for PS-DBM officers and other employees. | Photo by Judy Mark Aquitar

Integrity begins with I

Having been previously appointed as the national president of the Boy Scouts of the Philippines, Secretary Avisado is equipped with both theoretical concepts and practical applications on what it means to be a leader. But more than any theory and practice, he inferred, are the values one must possess to be able to lead a department worthy of admiration.

“We are in charge of protecting integrity [through] the conduct of our everyday tasks and functions… The values that we wish to impart to everyone else in the national government must originate from us,” Secretary Avisado said. 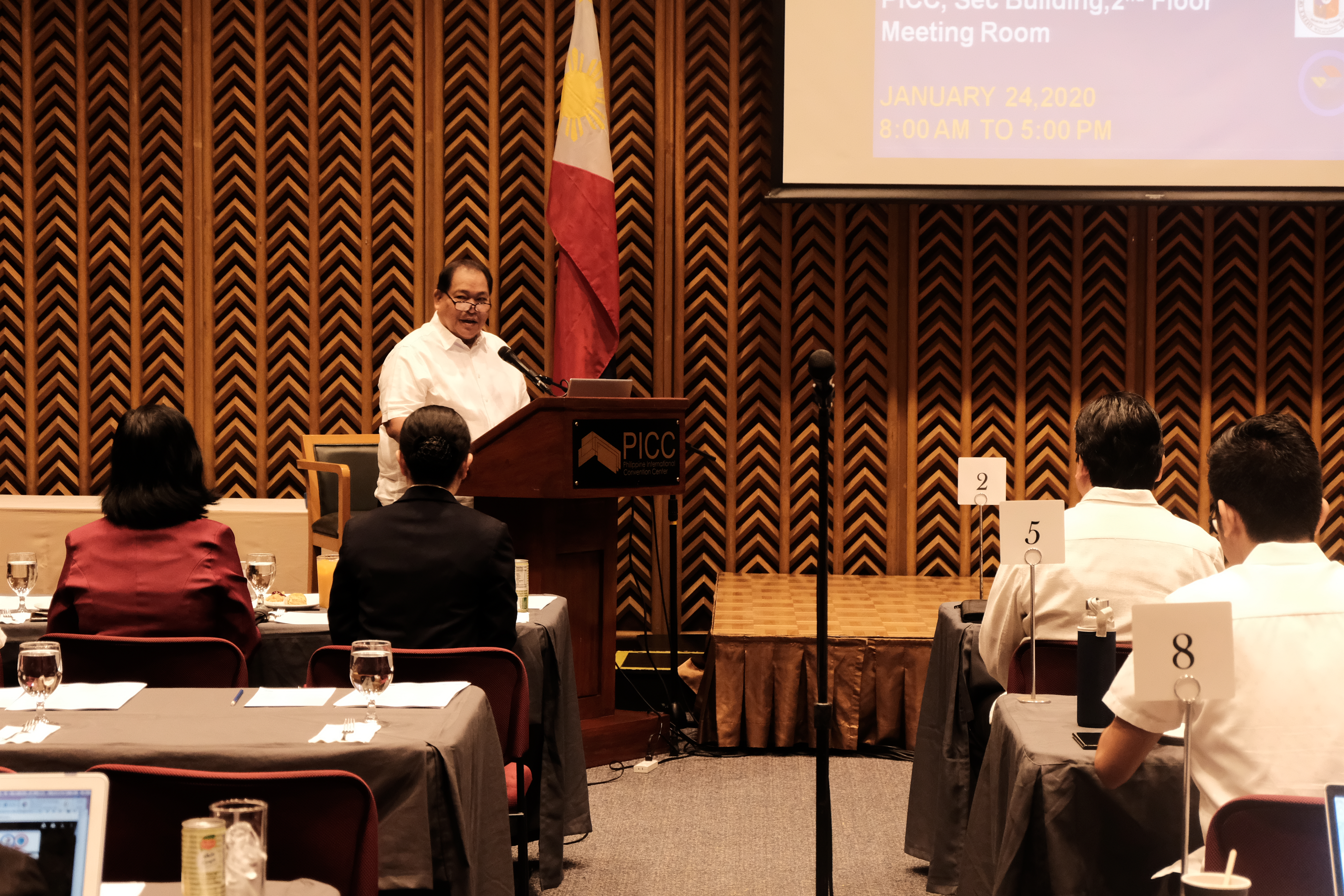 Following the discussion was a forum that shed light on certain points to ponder. But the query that demanded much clarification revolved around the idea of ‘conflict of interest’; a topic that is seldom discussed, if not completely downplayed.

Aware of its several manifestations, which he says vary depending on how it is contextualized — could be based on the Revised Penal Code, Anti-graft Law, Code of Conduct, or Civil Service Law, among others — DES Bernardo points to objectivity in assessing such manifestations.

“Anything that is in conflict sa Oath of Office mo, and interest mo in that capacity, kung hindi ito compatible, then it is a conflict of interest,” DES Bernardo said.

DES Bernardo also shared, partially in jest, the difficulty that comes with being an Internal Auditor because “hindi ka maaaring basta tumanggap ng imbitasyon, maging ninong,” in honour of one’s commitment to always be impartial. Internal Auditors, he added, are not fault-finders but rather solution providers in aid of government’s efforts to improve risk management, control, and other governance processes.

Amid the surge of more inquiries, and in an attempt to reassure that OP and DBM work hand in hand, DES Bernardo stated with conviction, “Kung anong problema niyo, problema namin.”

The long road and the bigger picture

The NGICS training and lecture is part of the government’s Integrity Management Program (IMP) which serves as an action plan of strategies “to reduce corruption.”

The IMP of PS-DBM is in line with two major government frameworks which are Ambisyon Natin 2040 and the Philippines Development Plan (PDP) 2017-2020 — the ultimate purpose of which is to make Filipinos secure, or panatag. These government frameworks, relatively, are anchored to one of the goals indicated in the United Nations Sustainable Development Goals (UN SDG) that aspires to attain “Peace, Justice, and Strong Institutions.” 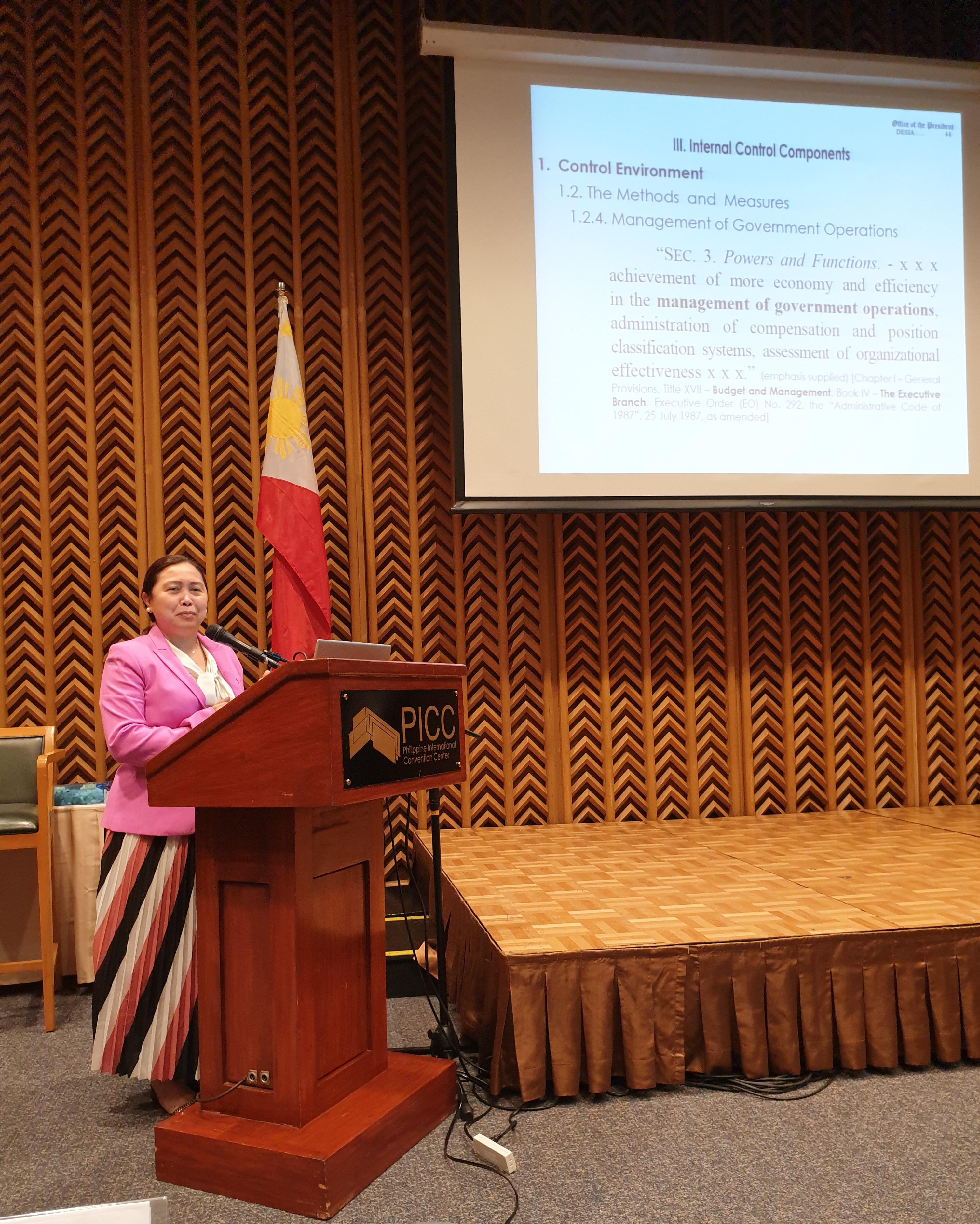 While the road is long to get to the destination, looking at the bigger picture makes the journey worthwhile.

This was what Undersecretary Bailen imparted when she took the podium to remind the attendees that in public service, many are called, but only few are chosen. In that regard, one might as well leave an indelible mark.

“We come from different backgrounds, but we are united by our desire to make this country better. And hopefully, when we leave public service, at least we can say, ‘We made a difference,’” Undersecretary Bailen said. 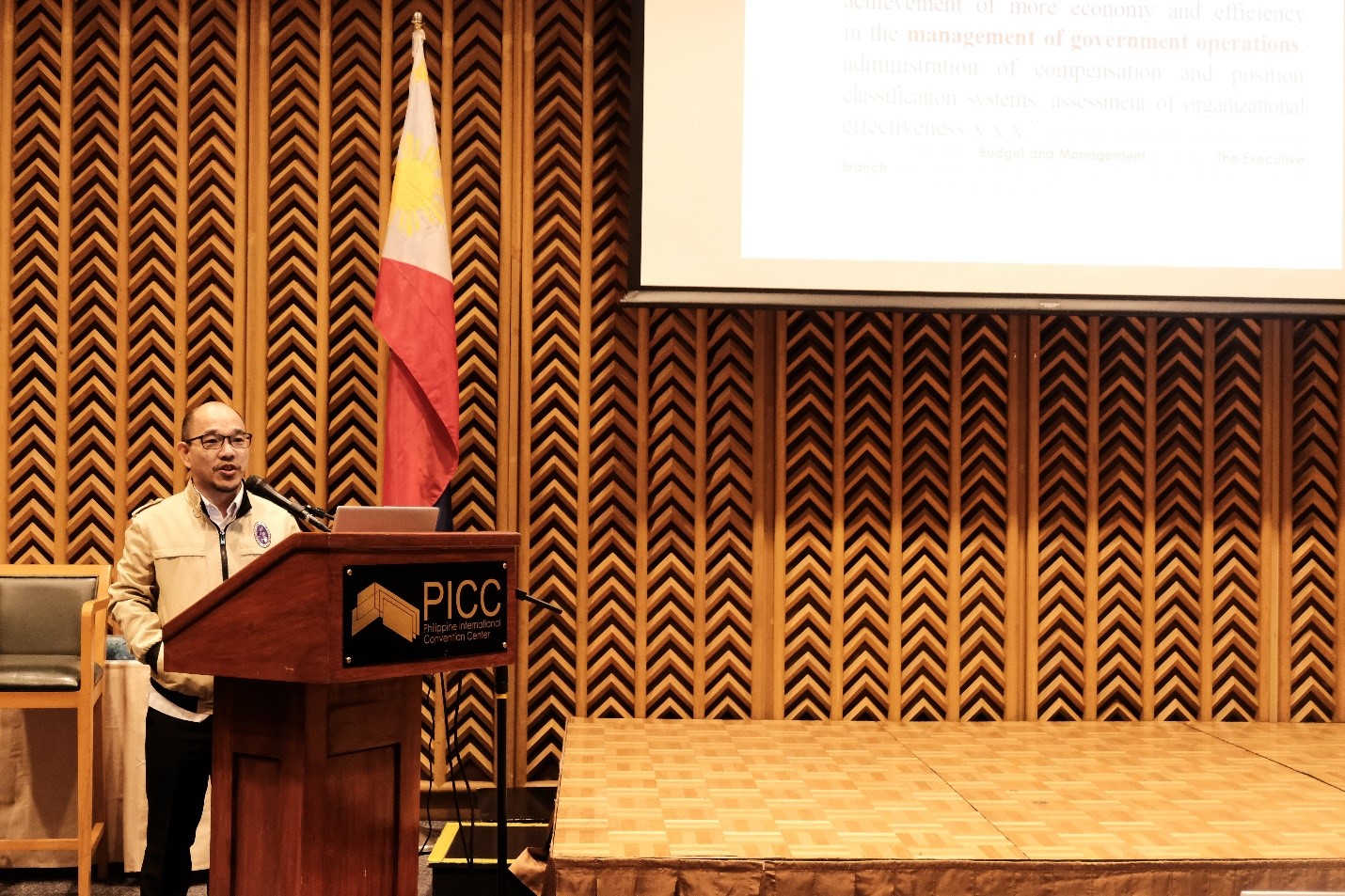 PS-DBM OIC-Executive Director Undersecretary Lloyd Christopher Lao, for his part, acknowledges the changes in leadership and organizational structure which may affect the normalcy of operations within the organization. But he remains optimistic nonetheless.

“Let’s just hold on… Thank you for your sacrifices. We don’t know much about each other, all I need is you really doing your best,” Undersecretary Lao said.

“I urge you to apply anything and everything that you are learning today for the continued development not only of our department but the entire bureaucracy. I have no doubt whatsoever that everyone here will make DBM proud,” Secretary Avisado, in a separate speech, concluded. 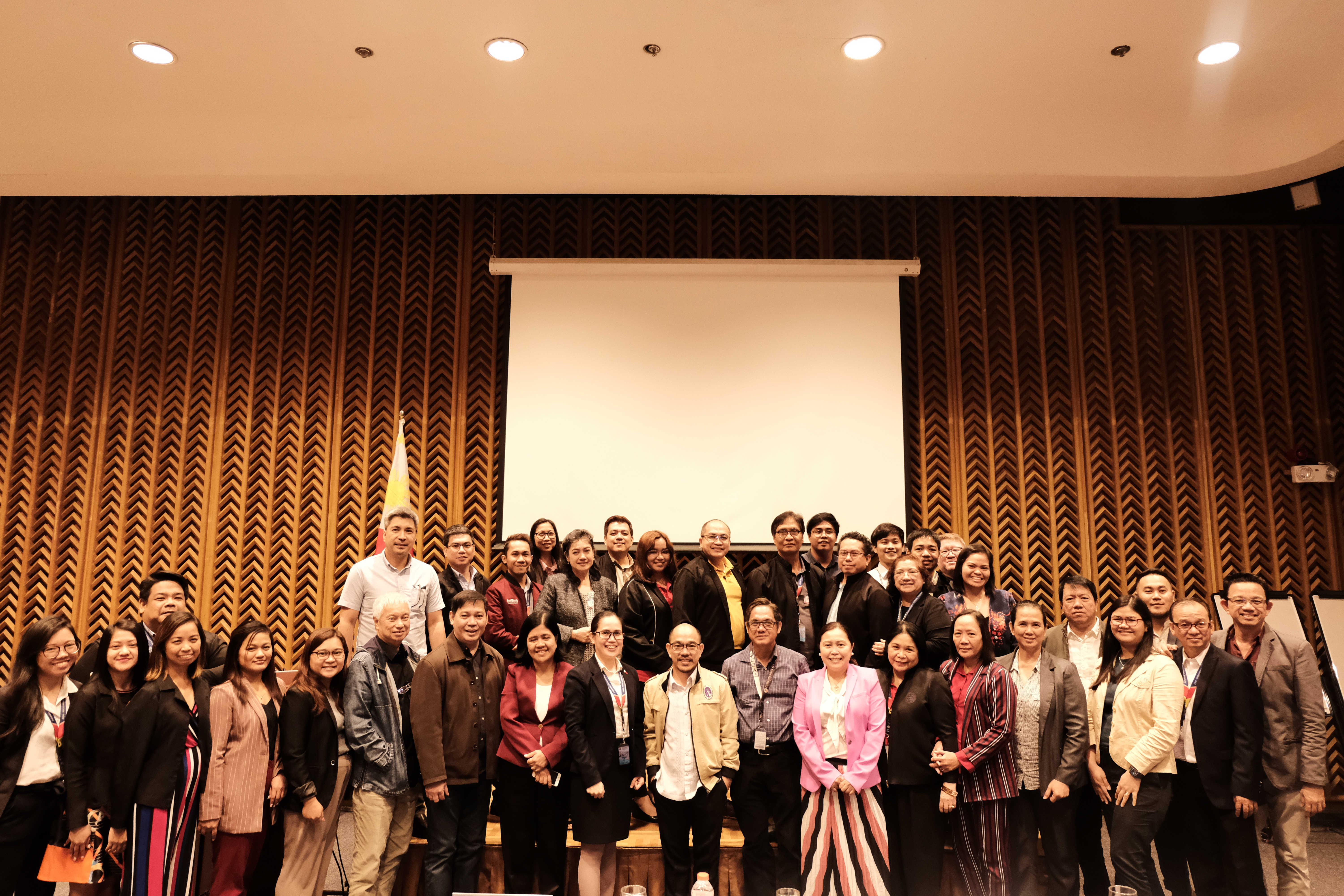 Division chiefs and other personnel of PS-DBM in a photo op following the successful NGICS training and lecture at the PICC on January 24, 2020. | Photo by Judy Mark Aquitar