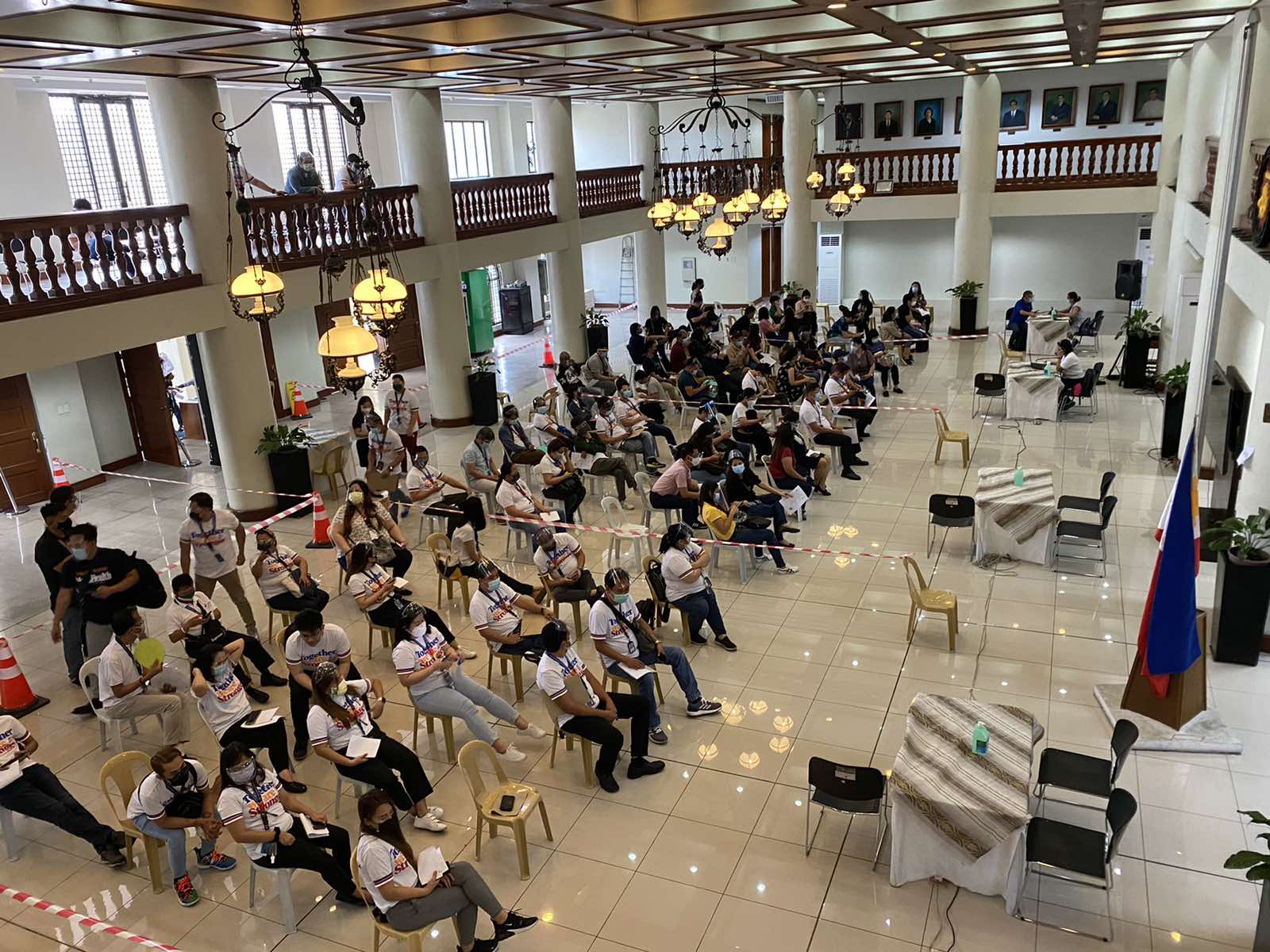 Majority of the employees of the Department of Budget and Management (DBM), including its attached agencies Procurement Service - Philippine Government Electronic Procurement System (PS-PhilGEPS) and Government Procurement Policy Board – Technical Support Office (GPPB-TSO), are now fully vaccinated following the successful facilitation of the first and second dose vaccination program on June 21 and July 19, 2021, respectively, at the DBM Central Office in San Miguel, Manila.

This came not long after the national government’s announcement to commence the vaccination of qualified individuals under the A4 priority group category.

Facilitated by the Manila Health Department, this employee mass immunization forms part of the COVID-19 #VaccineNation campaign of the local government of Manila that targets to inoculate not only its residents but also those who work at the nation’s capital.

But ultimately, this would not have been possible if not for the efforts and initiative of the Procurement Service – DBM (PS-DBM).

It was in 16 March 2021 when the PS-DBM COVID-19 Quick Response Team (QRT) first conducted a survey “to evaluate and assess the potential acceptance of vaccine among its personnel.”

At a time when the Philippines just began rolling out COVID vaccinations, vaccine hesitancy was apparent—even among the PS-DBM community—so much so that the QRT had to extend its deadline for the enlistment until April 26, more than a month after its initial sensing.

“There’s a level of disconnect and worry… I personally asserted the extension and created the email campaign for the last survey and last chance in being included to the list,” says Mirra Reyes, one of the QRT secretariats. In the said email, QRT reiterated that as much as it highly encourages employees to consider taking the jab, it should be a voluntary decision. The attempt was not done in vain; from less than 50% of the PS-DBM office population, the ending percentage increased to 77%.

Over the same period of finalizing the PS-DBM records from March to April, key personnel and officials of the PS-DBM pandemic response were also in constant coordination with relevant government offices including the Department of Health (DOH), the National Task Force (NTF) Against COVID-19, and the Inter-agency Task Force on Emerging Infectious Diseases (IATF-EID), among others.

Eventually, with PS-DBM’s relentless efforts, employees of DBM and of GPPB-TSO have also been included in the master list submitted to the DOH. 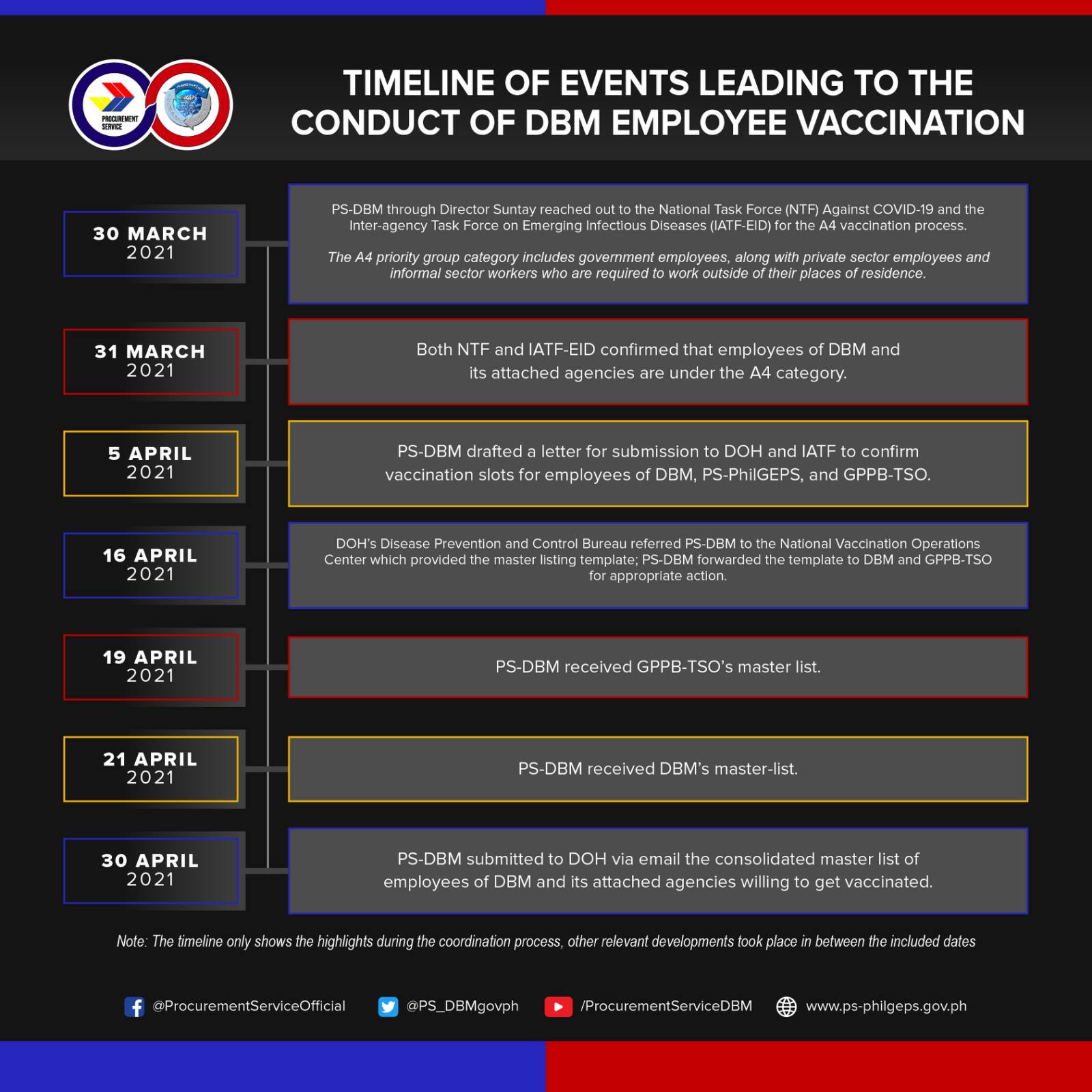 On 3 June 2021, QRT had to update the master list to exclude those who have already been vaccinated through their local government unit (LGU).

Finally, on June 21, and later on July 19, with efficient collaboration among DBM, PS, and GPPB-TSO, the much-anticipated mass immunization for the first and second vaccination shots took place.

The vaccination for the employees of the regional depot and sub-depot offices, on the other hand, is now being prioritized. They are, however, encouraged to coordinate with their respective LGUs for earlier schedule.

We at the PS-DBM are optimistic that this initiative will instill into the public a sense of confidence towards vaccines. More importantly, we hope that this inculcates an improved level of trust among our clientele, partner merchants, suppliers, and other stakeholders. After all, your satisfaction and safety remain as top priority especially in times of a global health crisis.

Together, we heal as one.