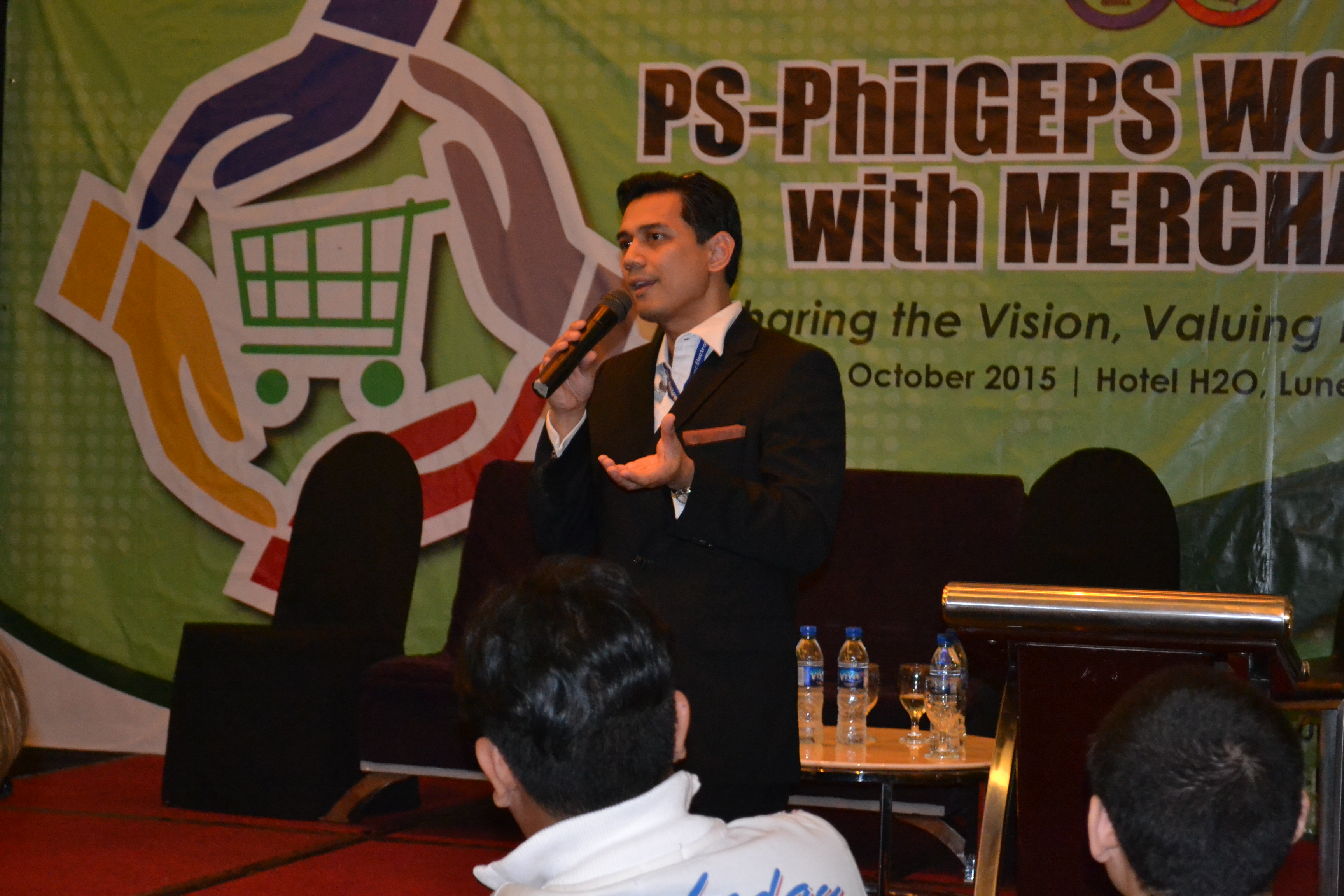 Atty. Jose Tomas C. Syquia, Executive Director IV of the PS-PhilGEPS addresses the 220 merchants that attended the workshop at the H20 Hotel Manila.

October 2, 2015 was declared a “no classes” day in Metro Manila and neighboring cities and municipalities on account of a low pressure area in Luzon that intensified into Tropical Storm “Kabayan”. However, the inclement weather did not stop the 220 merchants that came to participate in the first ever “Meet the Merchants” programme that PS-PhilGEPS organized for its roster of current suppliers and new suppliers to participate in the bid for about P11 Billion pesos worth of goods and services that it will procure in 2016.

The Procurement Service aggregates the requirements of the whole of government – from NGAs, SUCs, GOCCs and LGUs – for commonly used office supplies materials and equipment and distributes these to end-users in Metro Manila and in the provinces through its regional and sub-depots. PS-PhilGEPS also acts as a Procurement Agent based on Sec. 53.6 of the IRR of R.A. 9184 and purchased in 2015 items such as farm implements and equipment for the DAR, police mobility equipment for the PNP, assorted requirements for the APEC, and numerous IT equipment and services and other goods and services required by government agencies.

The Programme began with a talk by Executive Director Jose Tomas C. Syquia on the visions of the PS-PhilGEPS, the new policies being implemented and the enhancements and capacity building measures put in place so it can improve on its service delivery. He expounded on the organization’s desire to be government’s “Purchaser of Choice”.

The ensuing topics of the workshop were all of prime importance to the merchants – Mrs. Flerida G. Arias, Operations Manager, discussed the items that PS regularly buys and those that it bought in its capacity as Procurement Agent. PS buys in bulk paper items worth PhP600Million and office supplies and devices worth PhP1.1Billion yearly. She also discussed the Ordering Agreement that PS currently administers for consumables such as printer inks and toners with HP, Canon, Brother and Epson, Lexmark and Samsung. Atty. Vincent G. Canares explained the process by which PS buys all of government’s requirements – the planning stage, the bidding process and how orders are processed. He also discussed some pointers for merchants on how they can improve their bid and contract performance. Mr. Sixto V. Antonio, Jr. discussed how PS resells and moves out the items it buys to distribute these to the end-user agencies in Metro Manila and in the provinces. He also explained that the PS has further made it easier for clients purchasing small value requirements by launching the Retail Store and differentiated its process as against “big box” or bulk purchases served by PS’ main warehouses and depots. The question “Why should I be a PS-PhilGEPS Merchant?” was the topic that Mr. Rommel D. Rivera, Manager of the Finance, Administrative and Technical Services Group, discussed. The benefits of engaging in business with the government central procurer of common requirements were explained to the merchants. A video presentation was also shown which included testimonials from officers of several companies that are currently transacting with the Procurement Service-PhilGEPS. An open forum ensued after the discussions and lectures where merchants fielded questions pertaining to the procurement law. 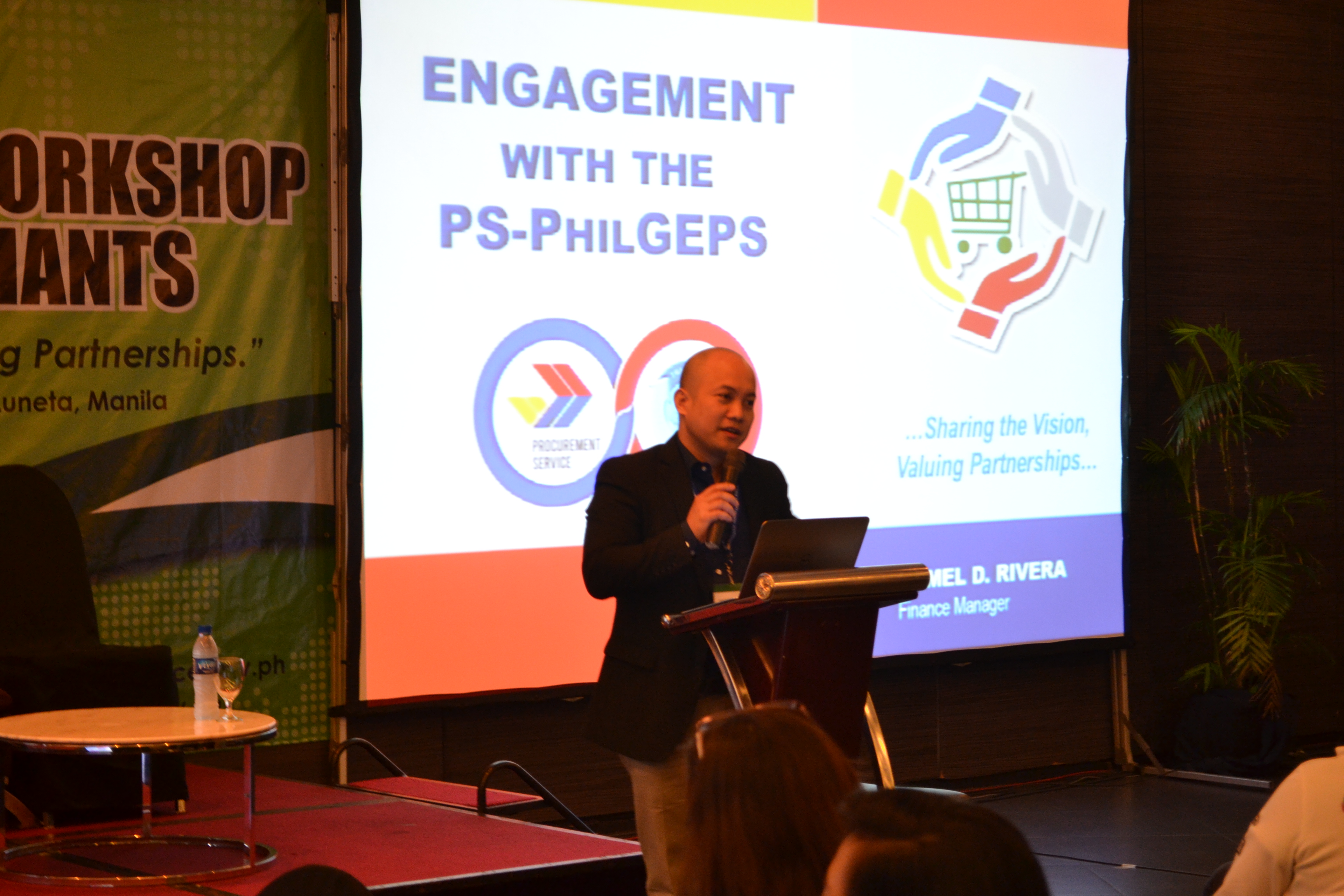 Mr. Rommel D. Rivera, Manager of the Finance, Administrative and Technical Services Group expounds on the benefits of being a PS-PhilGEPS merchant.

In the afternoon, Ms. Dalisay P. dela Chica, Chief of the Planning Division discussed the other areas of opportunities or what the PS-PhilGEPS, in 2016, will likely add to the list of commonly used requirements and other requirements of government that will be centrally procured. The list includes airline tickets, drinking water, photocopying as a service, printing as a service and IT and other electronic items. PS-PhilGEPS is currently talking to providers of the said goods and services to discuss terms of reference for the bidding or ordering agreement for the requirements.

Inasmuch as part of the long term plans of the PS-PhilGEPS is be the lead in implementing green procurement in the country, the event was also an occasion for Green Choice Philippines thru Mr. June Alvarez, to talk about the national ecolabelling program, specifically its requirements and benefits. It was also mentioned that in line with going “green” and “environment-friendly”, PS-PhilGEPS has become the first national government office to harness solar power by installing 51.3 kWp grid-tied solar PV power panels in its office premises in Paco, Manila. 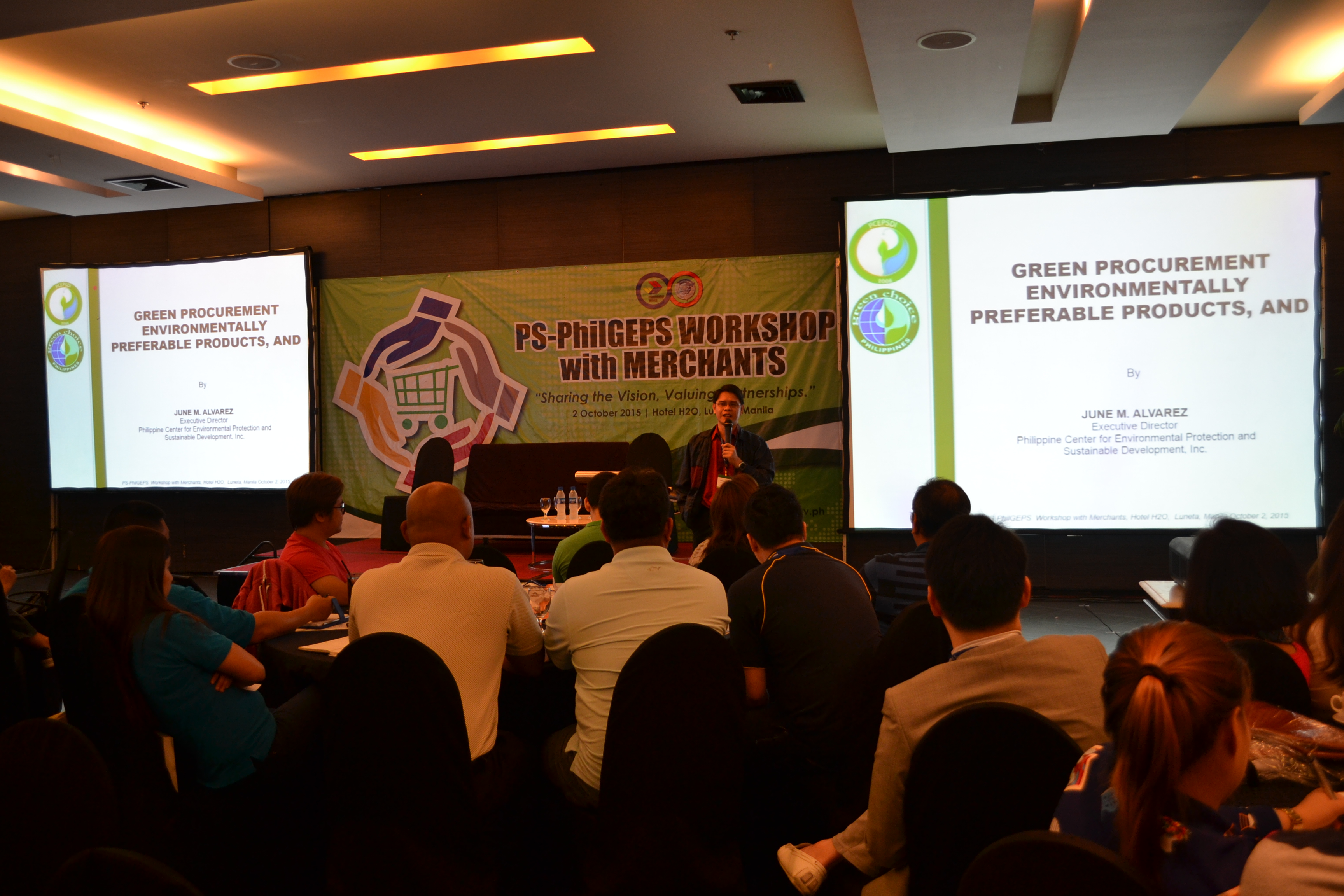 Executive Director Rosa Maria Clemente capped the day’s lectures with a discussion of the PhilGEPS modernization and an overview of the electronic submission of bids. Most of the attendee-merchants are registered in the PhilGEPS and majority have upgraded their membership to Blue or Platinum which is required for the use of the E-Bidding. 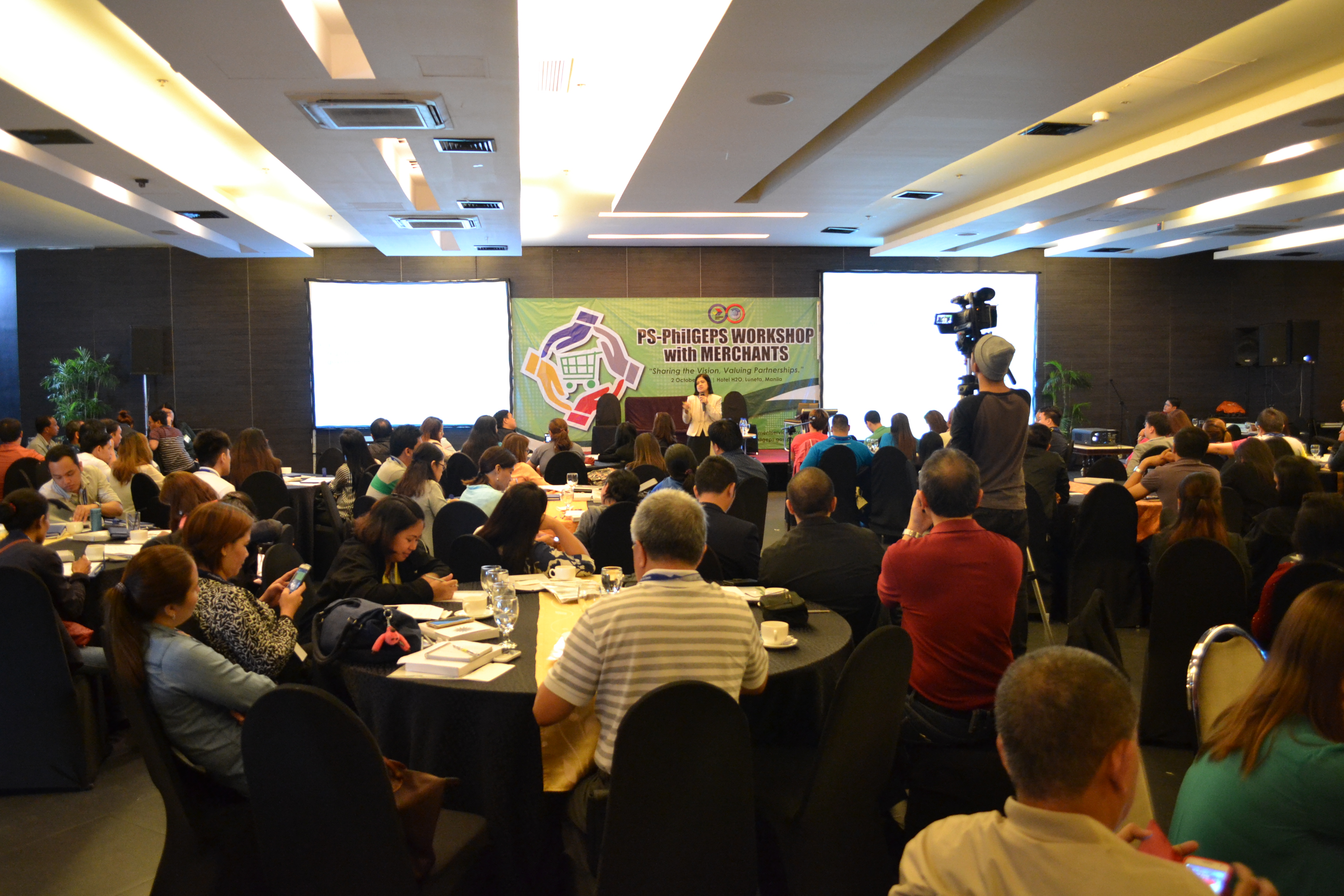 The merchant-participants were divided into two groups – those which are currently transacting already with the PS-PhilGEPS and those which are prospective partner-suppliers – for breakout sessions. The breakout sessions brought forth issues, concerns and queries by merchants on PS-PhilGEPS procedures and processes, public procurement policies in general, and experiences in participation in other agencies’ public bid opportunities. As regards the latter, Executive Directors Syquia and Clemente informed the merchants that we are taking note of the challenges experienced by merchants with other government agencies procuring, but PS-PhilGEPS, unfortunately, does not monitor or enforce compliance with procurement rules. The audience was assured however that oversight agencies such as the Commission on Audit and the Ombudsman are seriously looking into complaints on irregularities on procurement such that data is from the PhilGEPS is now being requested to support their investigations.

As to new suppliers which often have the difficulty of submitting appropriate documents during public bidding projects, ED Syquia offered the information that PS-PhilGEPS have been conducting trainings on e-bidding and assisting suppliers in the preparation of complete bid submissions so as to avoid bid failures and disqualifications. The rate at which PS-PhilGEPS is able to pay was also discussed and the merchants were informed that upon inspection and acceptance of deliveries and submission of all required supporting documents, our office is able to pay within ten days. Delayed deliveries are, under the law, subject to liquidated damages. New suppliers were also informed of the new opportunities that PS-PhilGEPS would like to pursue beginning with the procurement of storage and printing as a service. All information on this will be available at the PhilGEPS website at www.philgeps.gov.ph under opportunities posted by the Procurement Service. 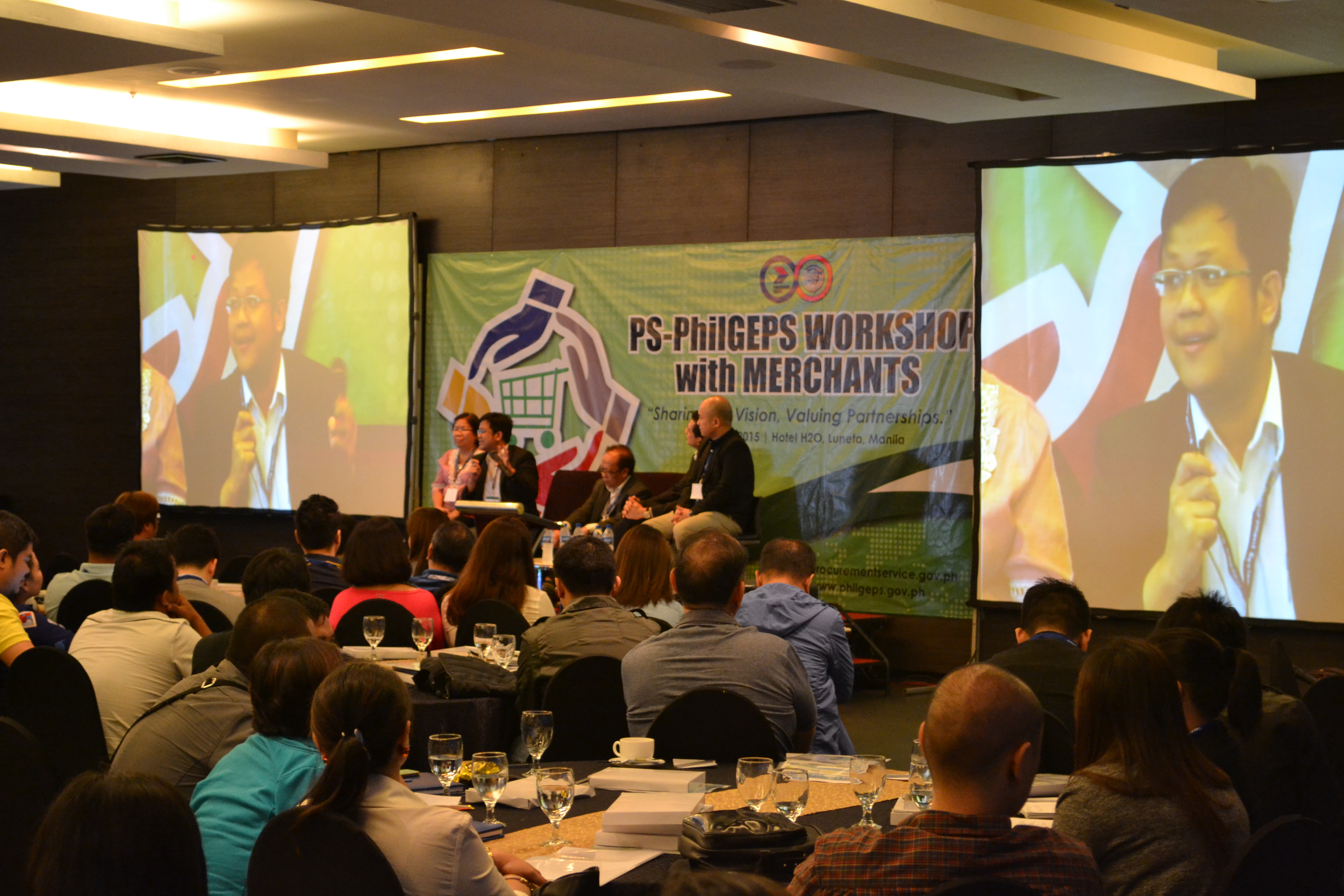 Current PS-PhilGEPS suppliers, on the other hand, fielded queries about the E-Bidding, processes in the PS such as post-qualification specifically the issue on 3rd party testing centers, and on the Ordering Agreement scheme. The last item was discussed at length and suppliers expressed their reservations as to how such procurement method will also protect them in terms of pricing and timely ordering of goods. Atty. Canares and Mrs. Flery Arias clarified issues on the Ordering Agreement and Mr. Rommel Rivera capped the discussion on this issue by saying that PS-PhilGEPS is here to build partnerships and as such, there should be good faith, trust and confidence both ways – between the suppliers and government. There were shared expressions of concern as to how we can improve on the availability of stock at all times and how suppliers can be more responsive to such need. It was acknowledged that the difficulty lies in the non-submission of all government end users of their Annual Procurement Plan (APP) for CSEs where PS is left with no choice but to project procurement based on prior years’ records. However, Mrs. Arias commented that we have been undergoing training on Supply Management and thus we hopefully can find ways by which we can address coming out with more realistic procurement projections and plans in the coming months. Sound suggestions from other merchants were also taken up during the breakout sessions like the possibility of PS adding hospital and personal care supplies in the list of commonly required goods, shortening the post-qualification process in the biddings conducted, etc. 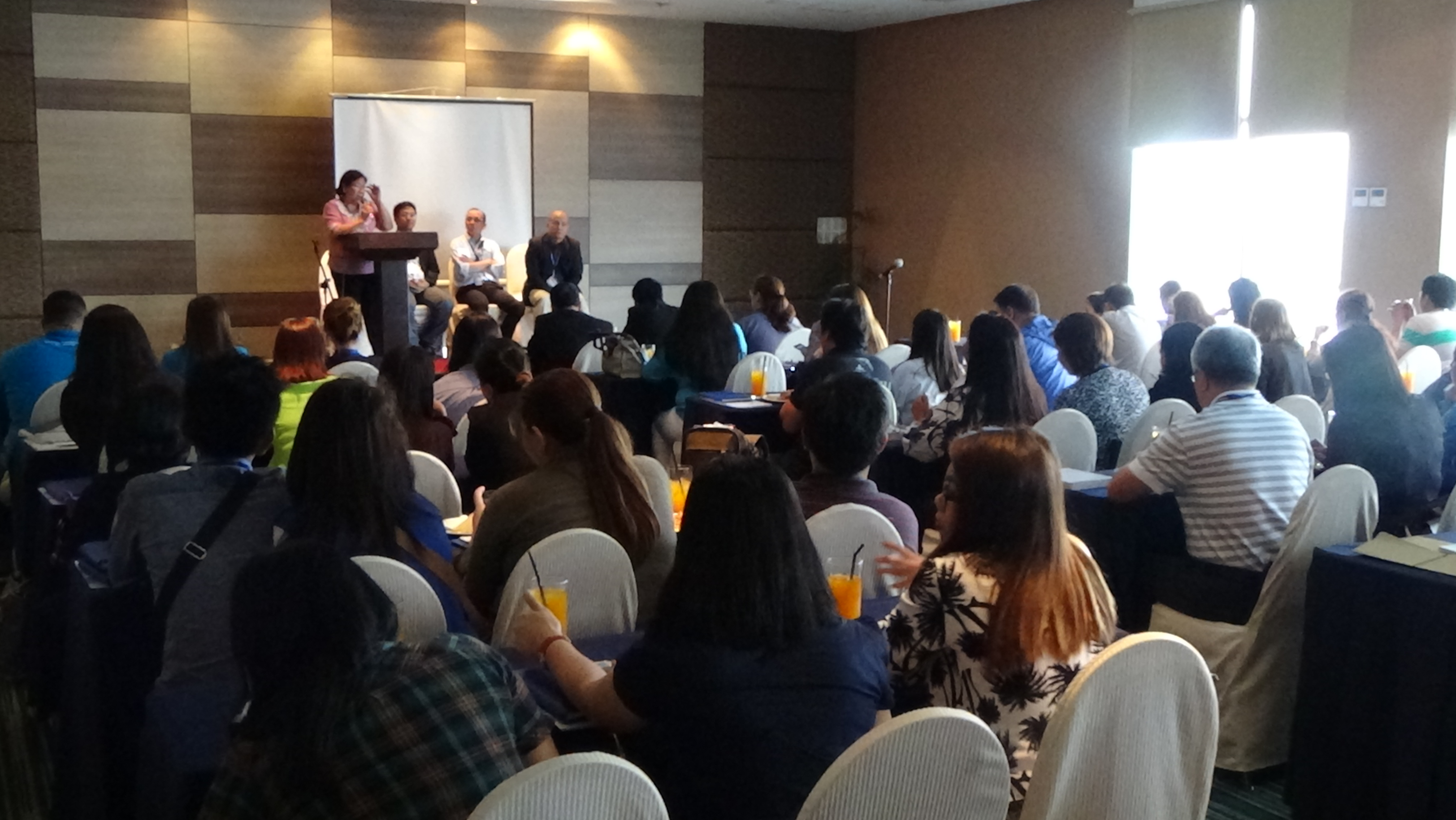 A post-event survey was conducted by the Business Affairs Division of the PS-PhilGEPS to gather feedback from participants on what lectures they found most valuable and informative, what other concerns they have that were not covered at the sessions and how the conduct of the event could still be improved.

Based on the post-event survey conducted by the PS-PhilGEPS, merchants were satisfied with the outcome of the workshop including the discussions provided by the speakers from the agency’s Executive Directors and Division Chiefs.

Mr. Jose Marie Alcantara, Sr. Channel Sales Executive of Wordtext Systems Inc. stated what he most liked about the event is that “The info about how big the opportunities are in selling to PS-PhilGEPS and the transparency it was able to execute with all its transactions. And lastly, the great commitment of Executive Director Atty. Jose Tomas Syquia on a much faster procurement of products needed by the government that also helps eliminate corruption in the government.”

“It gave the opportunity to those who are relatively new in dealing with PS to learn about the process on how to go about being a supplier,” Mr. Anthony Jamias, Sales Manager of 3M Philippines, shared in his comments

For the copy of each presentation, please click the link below:

Workshop with the Merchants by Atty. Jose Tomas C. Syquia

What does the PS-PhilGEPS Buy? by Ms. Flerida G. Arias

Engagement with the PS-PhilGEPS by Mr. Rommel D. Rivera

What are the Areas of Opportunity? by Ms. Dalisay Conrina P. Dela Chica